Acela screams
Past tombstones,
Shading Dead from
Morning sun.
One last
Bit of Black
Before Living rise,
Ruining all the Fun.

On April 19, I’m opening the second part of my neighborhood love stories. Below is the official press release for NY_Hearts: Park Slope. I’d love to see you there. And if you’re interested in doing some press on the show, hit me up!

Following up the first of his neighborhood experiences, writer and experience designer James Carter heads to Park Slope, Brooklyn for part two of NY_Hearts. Part walking tour, part love story, NY_Hearts offers people a new way to discover NYC by stepping into the characters’ shoes. Set in four different NYC neighborhoods, participants enjoy drinks and other surprises from local businesses, which are featured in an audio story shared over mobile devices. Other bits of the story include character websites, online character vlogs, original music and visual art.

Carlo Albán plays the role of Sal, a struggling musician who meets the love of his life, Madelyn. Together, amidst the brownstones of Park Slope, they make music and find more than just a songwriting partner.

“I can’t wait to share the second part of this four part love story,” said creator and producer James Carter. “Part two brings the tale of Sal to a close and introduces a new chapter in this series. Plus, there are several great local Park Slope restaurants and merchants appearing in this story.”

NY_Hearts: Park Slope
April 19 – May 12
Purchase tickets at BrownPaperTickets.com
For details about the show or to listen to part one, visit www.NY-Hearts.com 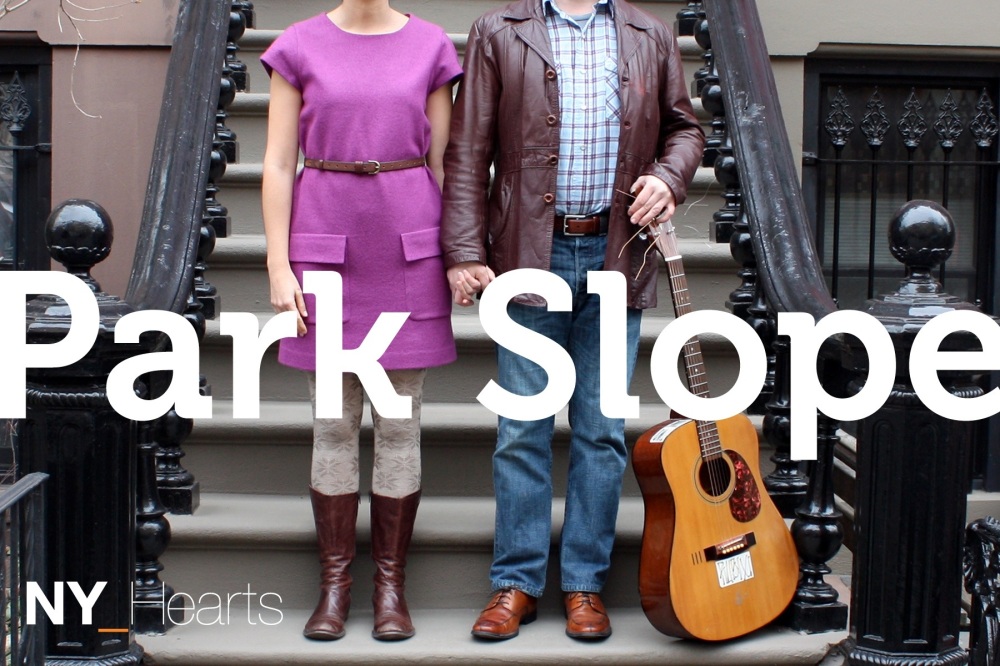 Carlo Albán has been acting in theater, film and television for over twenty years. He has appeared on television shows ranging from Sesame Street to Prison Break, and in films such as Whip It, Margaret and 21 Grams. As a writer, he developed his solo show Intríngulis, dealing with his experiences growing up as an undocumented immigrant, with Labyrinth Theater Company. Intríngulis received its world premiere in November 2010 in Los Angeles, in conjunction with Labyrinth and the Elephant Theater. Carlo is a member of Labyrinth Theater Company and a recipient of New Dramatists’ Charles Bowden Award.

One Muse Presents is a presenting and producing company of James Carter a playwright and experience designer. He uses transmedia to tell rich and exciting stories. Transmedia describes one story told over multiple digital and physical platforms. His previous transmedia play, Feeder: A Love Story, was presented by terraNOVA Collective at HERE. More about One Muse Presents and James Carter at www.onemuse.com

Usually, I point the questioner in the direction of Henry Jenkins’ often cited definition:

“It is a process where integral elements of a fiction get dispersed systematically across multiple delivery channels for the purpose of creating a unified and coordinated entertainment experience.”

I share how I crafted Feeder: A Love Story, a play that extended to blogs and online video. Then, I tell them about my current project, NY_Hearts, an immersive experience that guides participants through New York neighborhoods with the iPhone app, Moveable Feast. Generally, people are interested, fascinated, skeptical or confused, and, often, their minds are blown.

It’s a new thing for sure. The Sundance Institute, understandably, embraced this futurist story form, offering a retreat for creators called the New Frontier Story Lab. Tribeca Film Festival has the TFI New Media Fund that offers grants, and this year it launches a new transmedia program honoring creators who use innovative, interactive, or multi-platform storytelling tactics. Film festivals aren’t the only institutions supporting this trend. The Global Cyber-Narrative Project from Woolly Mammoth Theatre, Black Women Playwrights’ Group, and Carnegie Mellon University Entertainment and Technology Center offers residencies to playwrights of color to explore ways of expanding stage works to digital platforms. Until now, these institutions offered residencies, grants, mentorships, and project case studies, which are all vital to incubating new creative forms.

The missing pie piece has been audience engagement. It’s wonderful to listen to creators offering case studies. Other story architects learn new techniques, and it spurs audience to seek out more transmedia work. But only a few programs offer a place where audience can truly engage and play.

More than just a series of killer panel discussions with top notch transmedia creators, Convergence has several events on the roster for the audience to play with. Check out these four fun experiences offering more than just panels and discussions. 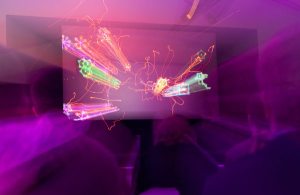 Renga is about finding a way home. Attacked and left for dead, our hero must carefully marshal their resources to build a new ship, confront their nemesis and finally return home. Only this hero isn’t visible on the screen – it’s the entire audience, working collectively to control the action using laser pointers directed at the screen. Turning the traditional hero’s journey on its head, Renga asks the question – what if the ultimate reward can only be grasped by many hands? The show combines real-time crowd interaction technology, retro videogame aesthetics and a wry sense of humour to bring the audience together and leave them feeling a deep sense of camaraderie. The title refers to a form of collaborative poetry with 100 verses that blossomed in 15th century Japan.

WHISPERS IN THE DARK
Presented by Jeff Wirth 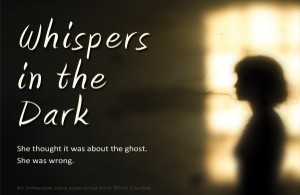 Whispers in the Dark is an immersive fiction experience in which a non-actor participant will become the lead character in a story that plays out over 24 hours in settings throughout New York City. A young psychic spends the night investigating a room that has recently become haunted in Lincoln Center. Her encounter with the ghost sets her on an odyssey through the hidden worlds of New York City to uncover a dark secret. A professional cast plays the characters that appear and engage with the participant in the real-world locations, while an invisible crew captures the entire experience in one extended 24-hour “take.” The experience culminates at the Film Society of Lincoln Center, where highlights from the adventure will be screened on September 30, 2012 during a live presentation.

MCCARREN PARK:
HIPSTER DINOS, TRANSMEDIA, AND PRODUCING SOMETHING FOR NOTHING
Presented by Caitlin Burns and Steele Filipek 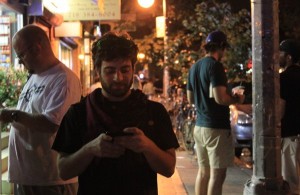 McCarren Park is an interactive educational transmedia experience available on phones, the Internet and even a card game. In this session, a selection of scenes in the first half of the narrative will be combined with lessons learned creating the feature for under $3500.00 How do you inspire collaborators to engage in your story world? What are some tactics that worked on this project and others to build an audience and to get that audience to add their own content into the story world? How do you create a story that can translate from one platform to another? How do you do that without a huge budget? Finally, what are the barriers to production on a miniscule budget and how can you overcome them? 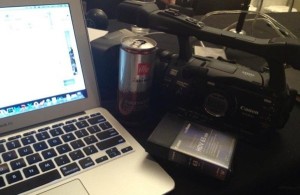 Two teams enter, but only one will leave victorious. Witness this first-of-its-kind exhibition-style transmedia showdown. Over the course of an hour, two teams of elite storytellers will conceive, build and pitch their best cross-media story. Not crazy enough for you? Wait! There’s more. In an unforeseen and dramatic twist, which you will already know about because you are reading this now, the teams learn they must also incorporate a secret ingredient. Spoiler Alert! The secret ingredient is you, the audience. That’s right you will be part of history. And who will decide the fate of these two teams? Some Ivy-league eggheads? Nope. Some B-list celebrities? Not happening! Those guys are way too expensive to book. In a stunning conflict of interest, you (yes you!) will be casting your vote to decide the outcome of this event. One team will be crowned victorious. The other will suffer the deep humility of having to watch the other team being crowned victorious.

Of course, there are plenty of professionals speaking about the evolution of storytelling. Collapsus creator Tommy Pallotta offers the event’s keynote address. Steve Schultz (Moveable Feast), Andrew Evans (National Geographic), Bill Plympton (Animator), and Amy Neswald (Indie Filmmaker) head up a panel on sharing stories in a geo-tagged world. Plus, the woman who literally wrote the book on transmedia creation, Andrea Phillips, discusses new roles audiences can have in storytelling.

I’ll be bringing NY_Hearts to the festival in a conversation about the Lower East Side experience that launched this past July and teasing part two of the story hitting Park Slope this fall.

I am also one of the participants in the Transmedia Test Kitchen, so if you want to see me get silly and try to make a multi-platform experience in 45 minutes, come by for a laugh or ten.

If you’ve ever wondered what transmedia is or want to play in new creative sandboxes, get a pass to Convergence in The 50th New York Film Festival on September 29th and 30th. It’s gonna be loads of fun.

I love to watch stuff burn. I’m drawn like a moth, hypnotized when flames play in the wind and consume oxygen, paper or wood. Twice, as a child, I almost caught our house on fire from playing with it. Finally, I figured out fire isn’t a toy, but an element to revere. A year ago, I made it to the festival that celebrates fire (and much more) in all its glory: Burning Man.

My first pilgrimage to the desert was difficult, fun, sad, joyful and rewarding. Burning Man is a lot of things to a lot of people. Just as with any art, everyone has her/his own relationship to it, and some people love it while others can’t be bothered.

No matter your take, I’m amped. When I saw a video documenting the creation of the official welcome sign, it fueled my fire.

Earlier this year, Tedshots posted a beautiful adaptation of Dr. Seuss’ “Oh, the Places You’ll Go!” shot in 2011. It’s one of my favorites.

Now that I have the lay of the land and a better perspective on the culture of it all, I’m hoping I’ll be able to see more fun things. This video by Rainbow Raccoon is long, but that’s because it covers so much. I didn’t even see several wonders it features.

Home is where the heart is, and I know so many burners declare it’s like returning home. It may seem silly to you, or perhaps you’re a kindred spirit who gets it. Whatever the case, my heart fills when I imagine riding my bike across the playa. 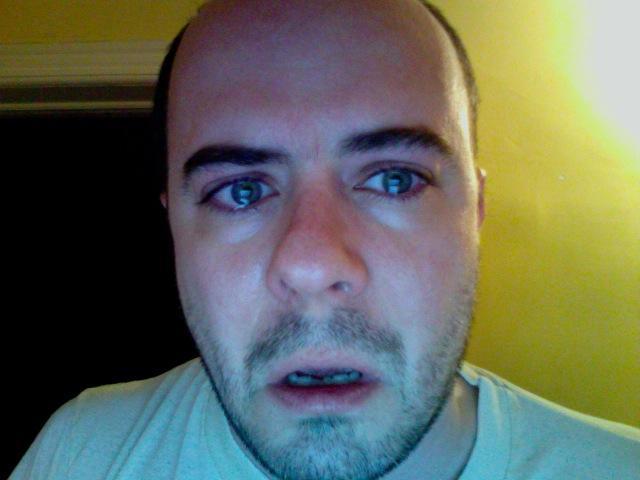 If you’re a playwright, send in your glum shot. Tons of fun.