We may be headed into the first ever live tweeted war. Just like Arab Spring, the conflict in Gaza is blowing up on social media. The Israeli government just asked its citizens to refrain from posting details on Facebook and Twitter about rocket attack locations. These updates offer too much information to Hamas, giving them an advantage for future strikes.

I hope they continue. Both sides. On Twitter, Rana B. Baker (@RanaGaza), a Palestinian blogger posted this text her father received: 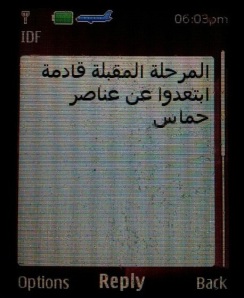 “The next phase is on the way. Stay away from Hamas elements.”

If you search #Gaza or #IDF (Israel Defense Forces) on Instagram, you’ll find a mass of images from both sides, showing destruction, propaganda and suffering. It’s a virtual war zone, and Twitter and Facebook are extended battlefields.

If you aren’t familiar with the Palestinian/Israeli conflict, Noam Chomsky recently wrote a wonderful piece that offers a first hand perspective, including a trip he took to Gaza at the end of October. He calls the Gaza Strip “the world’s largest open-air prison.” A linguist and philosopher, Chomsky has always been one of the most reliable and enlightened sources on this mufti-generational conflict.

Since the escalation of violence at the beginning of this week, my heart’s been heavy. I have both Palestinian and Israeli friends and colleagues. Most of them live in the U.S. and believe a peaceful resolution to the fight is long overdue. But here we are again. More people dying. More hatred born.

Recently, I’ve been doing research on how mindfulness meditation can alter the left prefrontal cortex of the brain, the part of the brain that cultivates compassion. I’ve also been reading about “mirror neurons,” which promote empathy. In the mix, I discovered this RSA talk from American economist Jeremy Rifkin. It speaks directly to what is happening in the Middle East.

We all know – in the pits of our stomachs – the violence is going to get worse before it gets better. And, I hope every moment of it spreads socially, affecting the minds of millions of people. Perhaps, finally seeing images and hearing the voices in real time will ignite our mirror neurons. Our empathy will grow, and we will come together as a global society to realize we are all in this together, on this great plane, trying to live this one life with grace and dignity.